There is no denying that the gig economy is transforming the world of work as we know it. The rise of the contingent workforce has had an impact on how companies source workers. It could be tempting to believe that the gig economy is just a passing trend among millennials and the generations after them. Research, however, has found that freelance workers are generally older. The gig economy is fueled by people of different demographics who want to enjoy flexibility while earning extra money. Popular gig economy apps for every type of work provide opportunities for people to participate in the gig economy, no matter what their interests or skill level.

Here are 20 statistics that show how the gig economy is growing at a rapid pace:‍

While previously the percentage of people working in the gig economy had been pretty steady, it jumped up 5% in ten years. This clearly shows that freelance work is turning into a viable option to earn a living. Newcomers are not just replacing people who are retiring or changing positions, they are coming in so fast that they replace them and fill 50% more positions on top of that.

Gig work can include the use of top gig economy apps like Airbnb, Deliveroo, Doordash and Upwork. These companies are part of what is known as the ‘on-demand’ industry. Any time someone is selling a service with a contract or selling a service on a short-term basis, it is considered part of the gig economy. With so many options in gig economy apps, it is not surprising that such a large portion of Americans were already earning money from gigs in 2015. It’s not surprising to see an increase in this gig economy statistic.

Want a fresh and comprehensive look into the hiring needs and trends of the on-demand industry? Download our free Hiring Benchmark Report today.

‍3. 73% of Gen Z freelancers have joined the gig economy by choice while only 64% of Millennials and 66% of Baby Boomers do freelance work by choice.

Some view freelance work as a necessary evil – a way to make ends meet when your full-time job is not paying the bills. However, freelance employment is only becoming more popular with each generation. Gen Z freelancers are more enthusiastic about the gig economy than any generation before them. With a more positive outlook on the gig economy, more people are likely to take advantage of this form of work and increase this gig economy number.

4. Freelance work has grown three times faster than the overall U.S. workforce since 2014.

There are more jobs in the U.S. now than there were in 2014, so it follows that freelancing work has also increased in this gig economy statistic. But it has done more than stay consistent with inflation. It is growing significantly faster than the workforce overall. The gig economy is not thriving just because it is following a trend – it has its own momentum.

Not only are more people freelancing today than ever before, but they are making freelance work a larger part of their lives. They may have long-standing contracts with clients who provide full-time work. They may have multiple contracts open at once. Or they may use a gig economy app to take enough orders or requests to complete an entire day with freelance work.

6. 50% of freelancers say they would not go back to a traditional job, no matter what it paid.

Freelancers are not just using the gig economy to fill gaps between better jobs. For about half of the current freelancers, freelancing is the better job. A lot of people turn to the gig economy because they are interested in a more flexible work environment that allows them to travel, work on their own schedule and have more control over the kind of work they do. Freelance work provides that freedom.

Projections from gig economy statistics show that it  is only going to continue to grow. Each year, more and more people are taking advantage of freelance work from gig economy apps to supplement their income or become their full-time work.

A majority of large businesses have started utilizing freelancers to perform specialized skills that they do not have within the company. They can create short-term or long-term contracts to meet the needs of whatever project they need help with. This creates an opportunity to build a strong relationship between the contingent workers and the business for future work.

For example, if it is a busy season and the business needs someone to help with the workflow, they can bring in a contingent worker instead of hiring a seasonal employee. When the busy season rolls around next year, they can call on this freelancer again – an option they are less likely to have with previous seasonal employees.

A number this high is a pretty significant indicator of what the workplace will look like in the future. Millennials have already started to change the way that large companies view gig workers. As they continue to take higher positions of power, these numbers will likely increase even more.

11. 58% of companies hire freelancers to get specialized work that is not available in their offices.

The majority of companies that hire freelancers do so because they need someone with specialized skills to help with a short-term or long-term project. Freelancers are a great option if a company is trying a new strategy that they are not sure they want to implement permanently. Instead of hiring a new employee, they can use a freelancer to test out new ideas and save money.

Freelancers are also good for businesses because they can be particular about the kind of help that they hire. There are more options to be found through gig economy apps than through real-life candidate sourcing. With more options, businesses can find the exact gig worker to fit their needs. And if it does not work out with that contingent worker, it is easier to close the contract and find a new freelancer than it would be to fire an employee and hire someone else.

The number of freelancers who work with large corporations more than doubled in 10 years. This gig economy statistic shows that freelance work is not just about meeting the needs of the employee. Corporations also benefit from working with freelancers. It is cost-effective. There is a diverse candidate pool. There is a large number of varied skills. As corporations continue to use freelancers, demand for these types of workers will only increase.

13. 60% of freelancers rely on the money they earn from the gig economy.

The gig economy is not just a place to make a few extra dollars. People rely on it as a steady source of income. Because people are relying on it, it is not likely to go anywhere any time soon. As it becomes a more reliable source of income, more people will join the gig economy.

Freelance work is a very popular source of income inside and out of the U.S. Because most freelance work is done through gig economy apps, people across the world can be hired to work on projects for businesses in different countries. This kind of reach makes freelancing a popular option for skilled workers everywhere.

Speaking of popularity outside of the U.S., the EU is seeing even faster growth in the gig economy. Some countries experiencing high unemployment rates may be more likely to turn to the gig economy to provide a more stable source of income or, at the very least, to find extra work that will help ease the effects of long periods of unemployment.

Not only are larger companies turning to gig workers, but these companies are hiring significantly more contingent workers every year. A 26% increase is no small change. This proves that the contingent workforce is providing quality work. If the work was not satisfactory, we would not see this sort of rapid increase in the amount of work outsourced to freelancers.

As large, successful businesses rely more on the gig economy, smaller businesses are likely to take their lead and start using freelancers as well. It is likely that the use of freelancers will become commonplace in businesses of all sizes.

Gig workers are able to earn more for their work every year. In the beginning, clients may have been suspicious of a freelancer’s abilities and work ethic. As the gig community continues to thrive, they can earn client trust more easily. With more trust, gig workers can start to ask for higher wages that are competitive with pay from traditional jobs.

There are a number of financial benefits for companies hiring freelancers. They can save on costs like health care, Social Security, Medicare, 401(k) matching and more. Cutting out these costs will save the company a lot of money and incentivize them to hire more gig workers to do more work. This will help the gig economy continue to grow and thrive.

19.  63% of freelancers believe that having a diversified income is more secure than traditional work.

Relying on gig economy work can be a scary thing. It feels precarious. You may lose a client at any moment. Some parts of the year may be more profitable than others. Despite these fears, many freelancers are confident in the stability of their self-employment. Because freelance work can come from many different clients, work can remain fairly steady even if one client stops sending work. In a traditional nine-to-five office job, if you get fired, you may not have any other income to fall back on.

20.  People who work from home have a 13% improvement in performance.

Many clients worry that freelance work will not be handled efficiently because they cannot monitor progress the way that they can in an office setting. How can they be sure that the freelancer was working during the hours that they billed? How can they check to see if a project is on track?

These fears have proven unnecessary as people working from home show higher productivity rates and a higher quality of work. Because freelancer workers can be more easily replaced, they are more motivated to produce quality work and prove their worth at every opportunity. This work ethic is sure to encourage companies to continue outsourcing work to freelancers.

The gig economy continues to grow at a rapid pace. It is clear that traditional companies as well as companies on demand benefit from the contingent workforce. This new way of working demands a new outlook on hiring and onboarding workers.

Fountain’s hiring software provides the functionality for companies to hire gig workers at scale quickly and easily. We have already transformed the hiring process of companies like PICKUP and Deliveroo.

Bonus Content:
BONUS
See how your hiring metics stack up with The Ultimate Hiring Benchmark Report 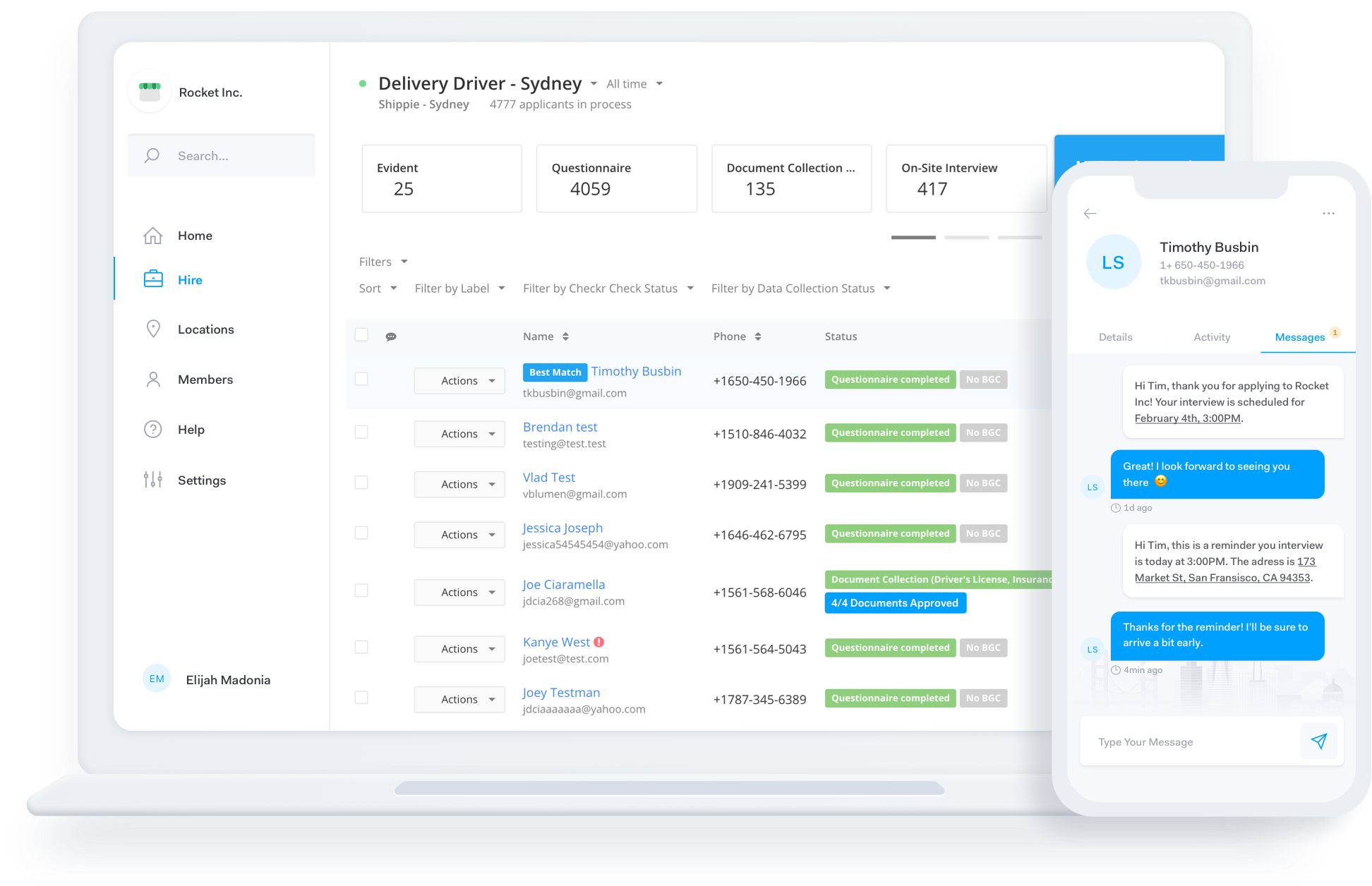